Fishing Charters in Fort Myers and Sanibel this past week have been pretty good. The Snook bite has turned on and the Redfish have continued to be good. Some nice size Trout have found their way to DOA shrimp lures and Air Heads also.

Friends and fishermen, Stephen and his lovely wife Diane were down from Massachusetts visiting their home in Florida (can’t fool me, I saw the weather back in Mass.) and called again for some sunshine and fishing, or in Diane’s case catching. Boy does she have the lucky hand (she calls it skill but Stephen and I call it luck).

We found some hungry fish and did they eat. Naturally the fish found Diane’s line first and just about on every cast. Stephan and I just moaned every time we heard her reel screaming as the line was peeling off the drag. The Jack Crevalle were especially hungry and we hooked some nice 8 to 12 pound ones.

The boys did make an appearance when Stephen got the last revenge as he hooked and masterfully guided a 34″ Snook out of the mangroves boatside for all to witness and proudly captured in some “grip and grin” photos.

We had a blast and even got some redfish to cooperate to round out the day. It was great seeing and fishing with the Bernardi’s again and look forward to our next adventure in the backcountry. Great memories to dream about while back in Mass. Until next time my friends!

Fishing in Fort Myers and Sanibel is warming up because it’s the time to really enjoy the back country flats of Southwest Florida. The Fishing around Sanibel Island is as hot as a Jalapeño sandwich. 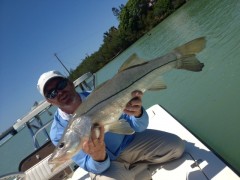 I love to Snook fish and it’s no better time than May. Still catch and release (quite frankly I’d love for it to be catch and release year round) but man are they fighting! It seems like they’re stronger than ever. Every fish I’ve missed the size judging by the fight.

The back country Trout fishing has slowed because of the warming waters and the Redfish has calmed a little.

The big draw now is the Tarpon. We’ve seen some decent numbers and many fish caught. As the waters keep warming the fishing should get better and better. Book a trip and experience the thrill of a lifetime.

Flats Fishing in the back country this week around Sanibel, Captiva and Boca Grande was not bad considering the 30+ mph gusts and temperatures diving down in the 40’s. Those that were brave enough to go out did catch some fish.

Snook are still locked in their bedrooms under the electric blanket but the red fish and trout did peak their heads out for some exercise. We’re starting to find some nice Speckled Sea Trout. Many fish over the 20″ mark found their way to our DOA lure presentation.

The saltwater flats fishing around Fort Myers and Sanibel Florida are pretty good for those that work hard and get out often. The water temperature changes rapidly due to the longer nights and cooler nighttime temps. Redfish and Trout like the cooler water but Snook are like me (love it warm).

Randy Love took nephew Walter Elder (Kansas State student) out for a day on the flats aboard the 18’ Egret Flats Boat. Randy’s from Wichita Kansas and is spending the winter in Fort Myers renewing his relationship with his High School Prom date. How cool is that!

The day started with us fishing a creek in the mouth of the river. Walter started with his first Snook ever. What a great fight! Pucker up Walter! Later Randy, not to be shown up, started with the Redfish. By the end of the tide flow, we caught several Snook, several Redfish, a flounder and a jack. By the way, Randy caught all the reds and Walter caught all the Snook. Go figure.

We moved up the river to a couple of other creeks and the bite slowed dramatically. We fished the docks, the mangroves and the fish must have been taking a mid morning rest.

Together we came up with the next plan of attack and it was to move in some canals and look for some large jacks. Payday! After a few chummers and the right anglers at the front of the boat, we started to pull in one after another. Both guys caught many fish but Walter was the one on the last cast that came up with the big boy. A 12 pounder!

What a great day with some new friends. I really enjoyed the day with two gentlemen and great fishermen. Study hard Walter and come back to see your Uncle soon!

If fishing the flats in Florida is your gig, then come to Fort Myers or Sanibel and enjoy the weather and the fishing. Chris Weaver, from the DC area did just that.

Chris visited Fort Myers first to be in a baseball tournament (in which his team won) but quickly became a big fan of the great fishing we have to offer. To start off the weather was great! The fishing started off a little slow. The first number of fish never seemed real interested in the bait. Fish after fish were missed but we didn’t let that stop us.

Chris being a great caster really helped in getting the lures in the strike zone. Finally we started to get multiple fish to the boat. Redfish, trout and other species were on the list at the end of the day.

Special thanks to my new fishing friend from the North. I’m looking forward to seeing you again! 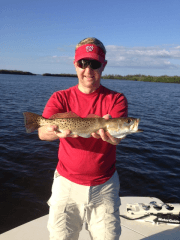