Flats Fishing around the islands of Sanibel and Pine Island Sound was pretty good this week. The weather was great as long as you got out early or fished the late afternoon. Tides were flowing nicely and the Snook were spawning in the passes so hopefully the stock will continue to improve.

Keep an eye out for diving birds. Off the beaches it would mean ladyfish, bonita, spanish mackerel or tarpon. We did have multiple hook ups this pass week while tarpon fishing so they’re here and hungry. We also had some nice snook catches along the beaches of the islands.

Deep jigging the passes got some nice bites of mangrove snapper and small grouper which are fun to catch and we did get broken off with some nicer one.

All in all this week had some nice days of weather and also strong bites.

My new 2014 167 Egret flats boat has been delivered and already proven itself as the perfect boat for charter fishing the backcountry around the islands of Sanibel and Captiva. 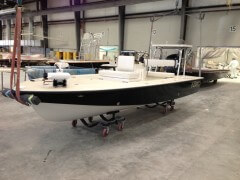 Egret finished the boat in March and I was knocking at the warehouse door ready to pick it up. It’s approx 2 feet shorter than my 189 but only 2 inches narrower in the beam. It drafts 3 inches shallower and is about 300 pounds lighter. All these ingredients put together is a great recipe for all the different types of fishing I specialize in, especially doing more lure and fly fishing. 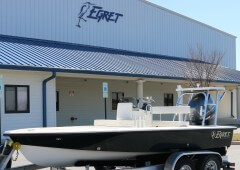 The Egret boat is known for being the “Rolls Royce” of flats boats. It’s smooth and dry ride is second to no other flats boat. The stability and quality is tops in it’s class. I worked with Egret owner, Frank Afshari, to custom build the perfect boat for fishing the backcountry waters around Sanibel. The boat is built using Carbon/Kevlar which is lighter and stronger than other materials. Some new features include, Minn Kotas I Pilot trolling motor, Power Pole Blade series shallow water anchor, Raymarine Dragonfly GPS/Sonar with new CHIRP down vision technology, Custom built Boatmaster trailer, and a Yamaha 115 HP 4 stroke power plant. Egret has numerous other quality features that makes this boat the best of the best. 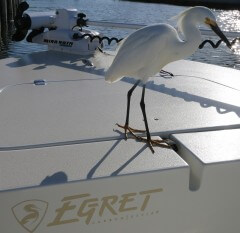 The next test is yours, so come on down and lets go fishing!

Luckily, I had friend/author Ben Shelfer with me. He’s easy going and whatever works for him. We struggled in the beginning, bait was scarce, protective cover was even scarcer. Thanks to my trusty Egret, best flats boat in the world, we were able to move where and when we wanted.

Bens love to catch snook, especially nice ones. The bite was on for a while, until a 6-7 foot bull shark decided to join in the fun.

Fishing with Charter Guides in the Sanibel and Fort Myers area of Florida has been pretty good lately. Weekly catches of Snook, Redfish, Spotted Sea Trout and other local species have been abundant. We’ve also started seeing some Tarpon and even hooked up. The water temperatures are continuing to warm so as it goes up, the fishing does also, especially for Tarpon and Snook.

We’ve seen and hooked some nice Snook and I can thank all my charters for not killing any and letting them move on to the spawning season just around the corner. Even though the season is open, they are still not back to the levels before the kill of 2010.

My friend from Canada, Shane Thompson, brought his dad back to try to hook him up with some nice fish and to get out of the extremely cold Canada winter. This year we hit the jackpot as we managed multiple Snook to the boat and even a very nice Cobia. Naturally, Shane’s dad had the lucky hand and his son was glad for it.

Beautiful day with some great guys (I’ll try to get them back for the muggy summer).

Fishing Charters in Fort Myers and Sanibel this past week have been pretty good. The Snook bite has turned on and the Redfish have continued to be good. Some nice size Trout have found their way to DOA shrimp lures and Air Heads also.

Friends and fishermen, Stephen and his lovely wife Diane were down from Massachusetts visiting their home in Florida (can’t fool me, I saw the weather back in Mass.) and called again for some sunshine and fishing, or in Diane’s case catching. Boy does she have the lucky hand (she calls it skill but Stephen and I call it luck).

We found some hungry fish and did they eat. Naturally the fish found Diane’s line first and just about on every cast. Stephan and I just moaned every time we heard her reel screaming as the line was peeling off the drag. The Jack Crevalle were especially hungry and we hooked some nice 8 to 12 pound ones.

The boys did make an appearance when Stephen got the last revenge as he hooked and masterfully guided a 34″ Snook out of the mangroves boatside for all to witness and proudly captured in some “grip and grin” photos.

We had a blast and even got some redfish to cooperate to round out the day. It was great seeing and fishing with the Bernardi’s again and look forward to our next adventure in the backcountry. Great memories to dream about while back in Mass. Until next time my friends!